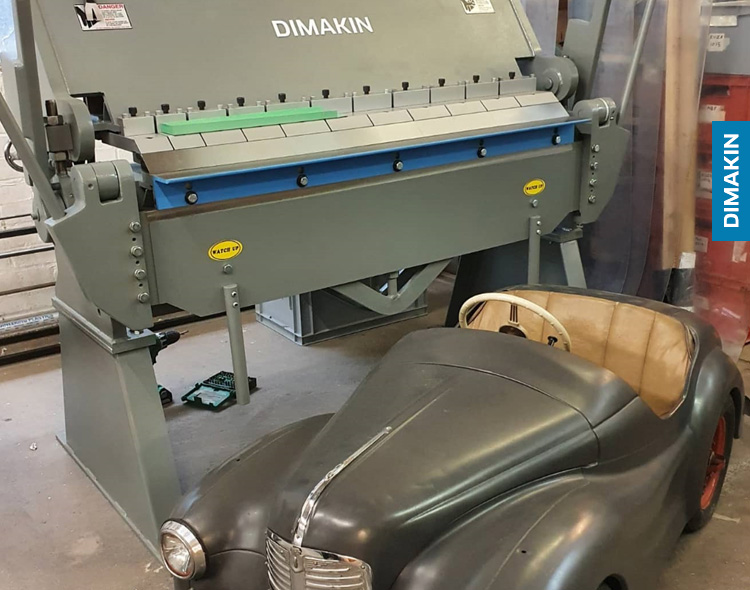 Burlen become the latest companies to understand the true power of investing in quality DIMAKIN machinery! With the delivery of their new CFP-100T, the 100 ton capacity C-Frame Press, Burlen have taken the next step to highly efficient production.

Over the years Burlen has become renowned for its role in manufacturing. Restoring and re-introducing a number of famous classic vehicle fuel systems and spares, including SU, Amal, Zenith, Stromberg and Solex. Burlen continues to supply this service to vintage and classic car and motorcycle owners across the globe, and proudly so.

Using a laser to cut blanks, they use a custom-made die to stamp parts into desired shape. Until recently, using a pneumatic H-Frame workshop press, but found it slow and underpowered.

Now with their new C-Frame Hydraulic Press, Burlen are able to produce quality parts with a fraction of the effort and time. Parts such as the bumper for the famous Austin J40 pedal car. A rare collectible, and an extremely popular piece among car enthusiasts; even seeing itself the centre of its own Goodwood Revival race, the Settrington Cup.

A short history of the Austin J40

The origin of the J40 can be traced to 1943. The government passed an act that acknowledged miners were being struck down by an illness called ‘The Dust,’ AKA pneumoconiosis. Many miners could no longer work, so the act helped to get them work with other employers. Chairman of the Austin Motor Company, Leonard Lord, wanted to provide a stable working environment for many ex-miners. Eventually hiring them to develop a toy car based on mainstream models.

The team were given a factory in South Works, and specific guidelines were developed. The car needed to be suitable for children between four and nine. There needed to be enough room for two, and the bonnet and boot needed to open. Additionally, the car also needed to have working lights with a dummy engine.

Producing a children’s car required that a child be measured, with design expert Alf Ash’s daughter being used. The prototype came with 12 inch tyres fitted on 8 inch wheels. A plywood frame and a leather seat stuffed with horsehair. Christened the JOY 1, the prototype was unveiled in 1946.

The next step was to create a production model. Various changes took place, until the Pathfinder version was chosen. A new factory in Longbridge was also opened in 1949 and production began. After a year, the Pathfinder was dropped and replaced by the J40 in 1950.

The J40, made out of scrap off-cuttings of metal, came with a high-quality design. Building on the JOY 1 prototype, the J40 featured working headlights, detachable wheels, opening bonnet and chrome paint job.

The J40 was sold for £33 and though it was meant for an American audience. The car sold around the world. The J40 proved to be extremely popular with children. They made excellent road safety vehicles, also appearing in safety films as well.

A total of around 32,100 J40s were produced, with the last one coming off the assembly line in September 1971. The J40 retained its popularity, becoming a collector’s item for a modern audience.

Sometimes referred to as a Gap Frame Press, C-Frame hydraulic press machines are named because of its unique frame. This frame forms a ‘C’ shape around the bolster and slide plate that make the working area of the press.  Similarly, other presses such as A-Frame and H-Frame presses exist in the same way.  C-frame presses often take up less floor space than other metalworking machinery, while providing great functionality and minimal stroke deflection. Just like other hydraulic presses, C-frame presses are extremely versatile.

The general design of a C-Frame Press consists of the rigid steel framework, hydraulic cylinder, and upper and lower platens; also known as the slide table and the bolster table.

Hydraulic press machines such as the C-Frame Press range come in standard configurations. However, they are also customisable to suit the customer’s needs. Specifically, DIMAKIN C-Frame Presses come in 30-ton, 60-ton, 100-ton, 150-ton, 200-ton, and 250-ton versions as standard.

C-frame presses are designed to be fitted with a variety of different tooling. This tooling allows for bending, punching, cutting or straightening applications, and many more.

One of the most common applications of a C-Frame press is stamping. During the stamping process, a tool called a die, is used to shape parts by applying pressure. Often using sheet metal such as copper, titanium, stainless steel, or aluminium, the ram stamps the sheet around a die. For example, car body parts.

Fastening two or more parts together with a hydraulic assembly press.

Applying pressure to material, usually flat sheet or strip metal, by moving it around an axis and applying stress. The bend is then permanently set when elastic deformation becomes plastic deformation.

Highly compressing all surfaces of a workpiece within a closed-die system.

An object produced by the compression of powdered material, typically done with a custom hydraulic compaction press.

An assembly technique to fold and flatten material so that two pieces are securely fastened together via pinching action. Commonly used to join sheet metal parts.

A process using a custom hydraulic press that creates imprinted designs in sheet material with male and female dies. Theoretically with no change in metal thickness.

Cutting or punching an opening. For example, a hole in sheet material, plate or various parts with a hydraulic C-frame floor press.

Assembling parts with an interference fit.

Bending, twisting, or stretching to correct any deviation from straightness in bars, tubes, or similar long parts or shapes.

A secondary cutting or shearing operation on a previously formed, drawn or forged part. Basically, the goal is to ‘trim’ surplus metal off the edges, bringing the part to the desired shape and size.

Why choose C-Frame Hydraulic Press Machines from DIMAKIN like BURLEN?

At DIMAKIN, we are committed to making the customer experience the best it can be. For instance, from demonstrations, to purchase, and aftercare, we work hard to make every step as smooth as possible.

Our top-quality sales and service team have decades of experience in the field. Because of this, they are here to make sure your new machinery is a perfect fit for your application. No matter the scale or size, we can find a machine that can accommodate your needs.

However, at DIMAKIN we do not just have customers, we have partnerships. We aim to provide the best quality machines, at the most affordable prices. We are here to break the standard, not your wallet.

Finally, we look forward to hearing from you!

There are a few considerations to make when purchasing a roll bending machine. Getting the... Read More 05, Nov, 2021

The DIMAKIN range of horizontal bandsaws in the ‘manual’ category come with many unique, time... Read More 28, Sep, 2021