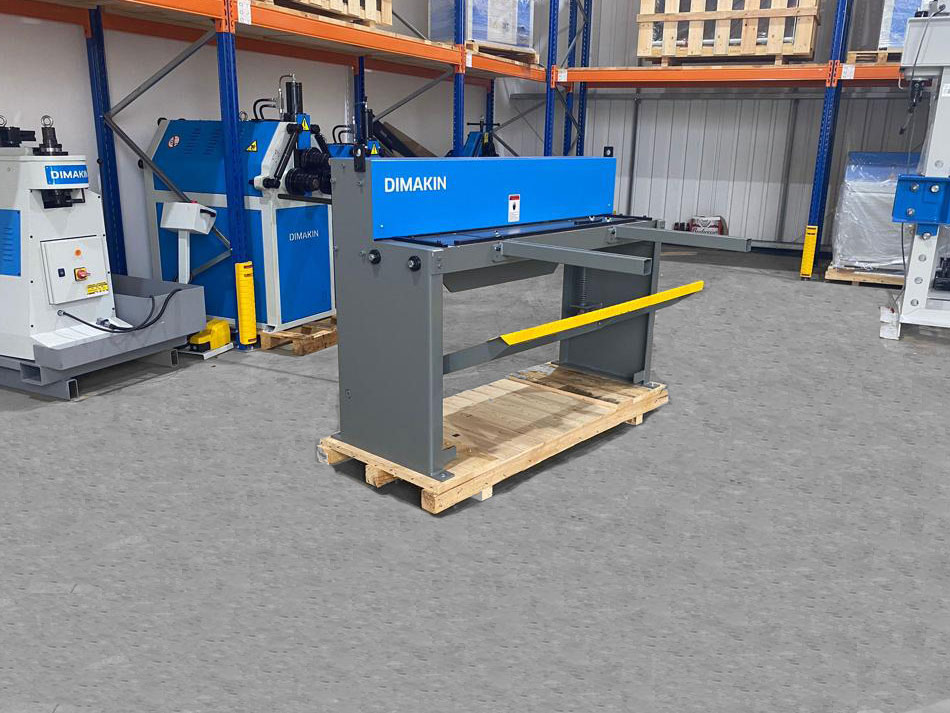 Below you will find a brief rundown of the different types of shears, their applications, and their strengths and weaknesses.

You might call them shearing machines or guillotines, use tin snips or a throatless shear. Whatever the name, cutting sheet metal cutting plays a critical role in the metal fabrication industry. Naturally, with such ubiquitous machinery as metal cutting shears, there are many types and many names for the tool.

At its most basic, the cutting process involved in shearing metal requires enough force to be applied to the material that it will fail along the line required. Most commonly, shearing is used to cut a sheet parallel to an existing edge which is held square. However, equipment such as ‘throatless shears’ exist on the market that allow complex shapes of undefined length to be cut. Below you will find a brief rundown of the different types of shears, their applications, and their strengths and weaknesses.

The Alligator Shear takes its name from the appearance of its hinged jaw and the motion in which they operate. Like many machines with the capacity of an alligator shear, they are hydraulically powered through a cylinder. Typically, alligator shears are used to roughly cut pre-finished metal stock. Some examples of the applications for these machines would be rebar cutting, I -Beam cutting, and other such material. Unlike many types of guillotines, an alligator shear is designed to cut more than specifically sheet metal.

Robust and reliable, their simple operation is popular in the metal fabrication industry. However, such machines are ill-suited to accurate or smooth finished cutting.

Moving to machinery with more precision, bench shears can be manual or hydraulic, but as the name suggests, bench mounted. While cutting sheet metal is a bench shears primary focus, many have steelworking stations for cutting materials such as rebar. With long handles, bench presses can reduce physical effort required to cut thick material with relative ease. Due to their location, bench shears are rarely much longer than 12” or 300mm in blade length.

When you think of shearing equipment, you will probably imagine that they can only perform straight line cuts, by definition. This is true for most machines. But, in order to achieve patterns and shapes for some applications, metal fabricators can choose a throatless shear. Additionally, throatless shears increase the limitations of other shears constraint of the length they can cut in one operation. Successive passes can be infinitely made into any length sheet.
Throatless shears, unlike other cutting equipment, do not present any limitations as to how freely the metal specimen can be moved around the cutting blade. This is because they do not have a ‘throat’. As the operator makes use of the throatless shear, they can move the metal around, straight, round, or irregular.

Similarly to a bench shear, with its long handle, the throatless shear is capable of cutting thinner metals, like aluminum and mild steel. However, throatless shears may not be able to cut through thicker metals. In this case, a sharper hardened steel cutting blade should be used.

A metal guillotine, or shear, generally comes in one of two styles. Hydraulic or Manual. With manual machines, a foot pedal is used as the actuation method to descend the blade. Sometimes referred to as a treadle shear or treadle guillotine, the foot pedal spans the entire width of the machine. Once the operator is satisfied with his position, stepping down on this pedal will lower the blade and shear the sheet. Metal guillotines are by far the highest capacity in cut length in a single pass, and additionally thickness of sheet.

With manual effort comes the eventual capacity limits associated with cutting over a metre of sheet at once. When this limit is reached, your next port of call is a hydraulic guillotine. Hydraulic guillotines, as the name suggests, are operated by powerful motors, and actuated by a small foot pedal. Hydraulic shears can easily cut long lengths of sheet, but also some even have capacity to cut thicker plate metal. To understand the difference between Sheet and Plate, you can read an earlier article we wrote about that here.

DIMAKIN provides for the market in between the levels of hobbyist and fully CNC industrial. As such, DIMAKIN produce sheet metal shears for mid to high capacity. Supplying both manually operated and hydraulically activated machinery.

If entry level sheet metal shearing is all that you require, the foot operated HS-1316M is the perfect introduction to guillotines. For more capacity and a little less physical exertion, the hydraulic versions (such as the HS-1320 and HS-1335) are powerful workhorses operated at the press of a pedal.

The main question you must ask yourself is does how much it will be used justify manual or hydraulic? When considering this question, it’s important to consider the next 10-15 years of fabrication, too. Is your workshop likely to grow beyond this requirement enough to justify a hydraulic version? Alternatively, is the machine likely to be used so sparsely that the manual version will suffice.

Still got questions about types of shear?

By now hopefully you are more familiar with the anatomy of different types of shear, and what DIMAKIN can offer.
However, if there is anything you feel we haven’t covered well enough, or you have any further questions at all, get in touch! Feel free to call us on 02476210123 or email us on sales@dimakin.co.uk.

How to choose the right speed and blade for my CS-350-DM Coldsaw?

The most common two questions asked when a customer is investing in a coldsaw is... Read More 29, Mar, 2022

4 Tips to maximise the efficiency of your workshop

Poor efficiency can very often mean lost money. There are many things that can bring... Read More 25, Feb, 2022

Tips for extending the life of your cold saw blades

As 2021 draws to an end, we at DIMAKIN want to take this opportunity to... Read More